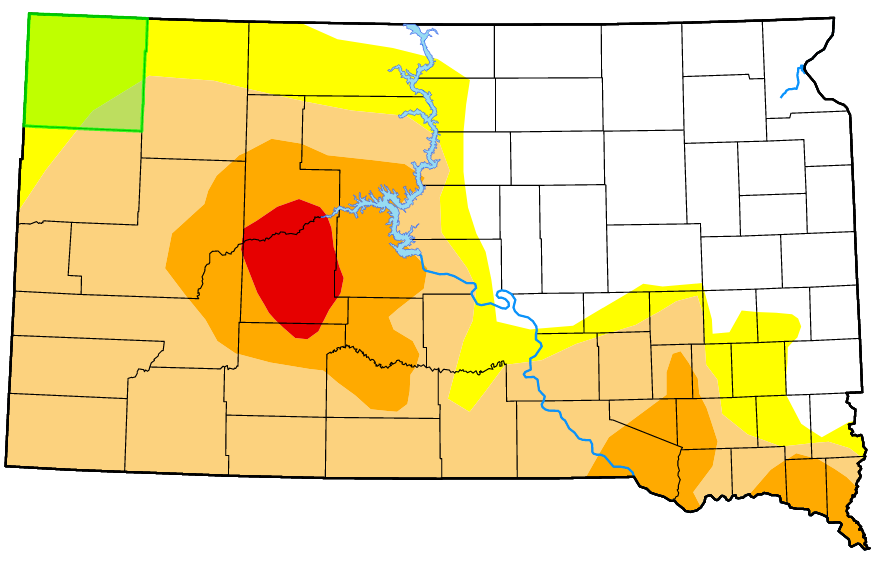 PIERRE — Memorial Day weekend storms and recent severe weather and rain continue to slowly cut back on drought conditions in South Dakota. This week’s update of the U-S Drought Monitor for the state shows areas of no drought now including Hand, Hyde, much of Buffalo, eastern Potter, Sully and Hughes and even into northeast Lyman County. Abnormally dry conditions are noted along the Buffalo/Brule County border, central Lyman, north central Tripp and central Hughes, Sully and Potter Counties. Moderate drought takes up western Hughes, Sully and Potter Counties along with western and southeastern Lyman, most of Brule, much of Tripp, eastern Jones and Stanley, southern, western and eastern Mellette; southern Jackson and northern Ziebach and Dewey. The worst of the drought conditions remain in central to west central South Dakota. Severe drought is indicated in much of Stanley, southern Dewey and Ziebach, northern Jackson and much of Jones and Mellette. Extreme drought remains in place across much of Haakon and southern Ziebach Counties with smaller areas in adjacent parts for Jackson and Stanley Counties. Drought Conditions could continue its slow improvement as rain is in the forecast into the beginning of next week.