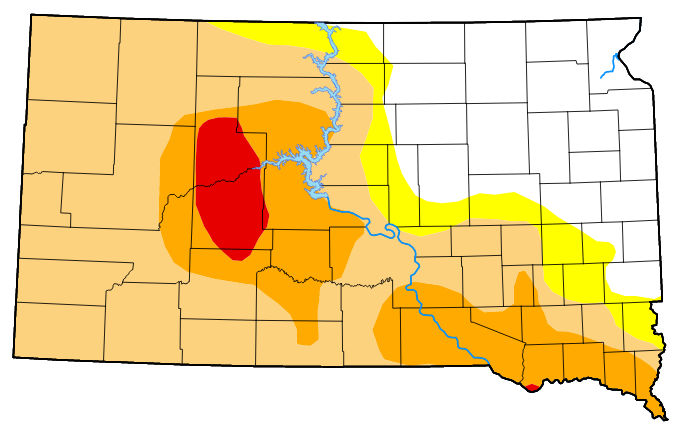 PIERRE — Even with more beneficial rains, drought conditions got worse in some parts of South Dakota in the last week. Those rains missed parts of Ziebach and Haakon County where D-3 extreme drought is now being show, indicating the heart of the worst drought in the state. Heavy rains did pass through those areas early Thursday morning. Elsewhere the rains are making a difference. No drought has moved in the Hand County, north of Highway 14 and northeast Hyde County. A narrow band of abnormally dry conditions are set up in southern Hand, northern Buffalo, much of Hyde, and eastern Hughes, Sully and Potter Counties. Moderate drought encompasses much of western and central South Dakota including much of Hughes, Sully and Potter, northern Dewey and Ziebach, southern Jackson, central Lyman, much of Buffalo and eastern and western Mellette and much of Tripp. Severe drought is being seen in Stanley, southern Dewey, central and eastern Ziebach, northern Jackson, Jones, central Mellette and western and southeastern Lyman along with eastern Tripp.