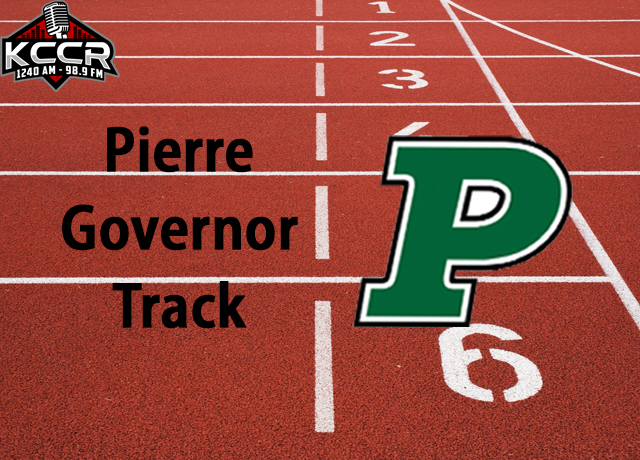 The Pierre Governors had a day in its last home invite of the season as the Govs would win 15 events on the day on Tuesday at Hollister Field.

For the Governors eight of the 15 winners came on the boys side as Landon Bertram won the 100 meter sprint, Jack Merkwan won both the 110 and 300 meter hurdles, Blake Wagner set a new PR in the discus throw as did Matthew Coverdale in the javelin throw. Andrew Campea won the high jump, Brock Moser the pole vault and the 4×100 relay team of Trevor Rounds, Tayshaun Agard, Jett Zabel and Brayden Houlette won the relay race. For the Governor girls, Kali Ringstmeyer set a PR in the 100 meter sprint win and also won the 200 meter sprint while Addison Cumbow won the 100 meter hurdles, Maya Shorter the javelin, Marissa Matthews in the pole vault, Aleise Christopherson in the long jump and MaKayla Sherwood in the triple jump.

Jesse and Jordan Schall finished one, two in the shot put throw on the day for the Sully Buttes Chargers while Stevie Wittler took home first in the 300 meter hurdles and Lydia Hill won both the shot put and discus throws. Wittler also was second in the 100 meter hurdles and the team of Wittler, Olivia Olson, Courtnie Weinheimer and Tahnie Yellowhawk placed second in both the 4×100 and 4×200 races. Griffin Peterson was third in the 800 meters.

Fredricksen Andrew was third place for the Stanley County Buffaloes in the 100 meter sprint while teaming up Barret Schweitzer, Cormac Duffy and Brendon Bothwell to place third in the 4×400 race. Duffy also was second in both the triple jump and long jump for the Buffaloes. Taylee Stroup, Cadence Hand, Mickey Hallock and Elexes Peterson had a top five finish in the 4×100 relay race.