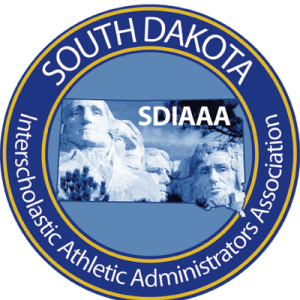 The three newest members to be inducted into the South Dakota Interscholastic Athletic Administrators Association Hall of Fame are Larry Ball of Jones County, Jim Dorman of Sioux Falls and Mark Meile of Hartford.

The induction ceremony was held in conjunction with the Spring Athletic Director’s Conference Award Luncheon at the Lodge in Deadwood on Thursday, March 31, 2022. To be chosen for this honor a person must have been an athletic director for ten years and an active member in the SDIAAA.  Candidates are considered through three criteria, national, state, and local involvement.  Individuals are chosen who have volunteered time to promote the belief and purpose of the SDIAAA and who have promoted the importance of athletics and sportsmanship within their school and community.

Jim Dorman, CMAA graduated from Castlewood High School in 1970.  He earned a bachelor’s degree in 1975 and master’s degree in 2000 from South Dakota State.  Dorman’s educational career began at Hamlin in 1976.  He was SDHSCA Cross Country & Track & Field president and a member of the SDHSAA Advisory Committee for both sports.  He was athletic director at Hamlin for three years, Madison for five, and Sioux Falls Lincoln for 11 years before retiring in 2016.  He was selected as Executive Director of the SDIAAA in 2000 and SDHSCA in 2007.  He was South Dakota AD of the Year in 2012 and 2016, and finalist for National Athletic Director of the Year.  Dorman is a member of the National Executive Directors Council and received both the NIAAA State Award of Merit and NIAAA Distinguished Service Award.  Dorman was inducted to the NIAAA Hall of Fame Class of 2022.

Larry Ball graduated from Woonsocket High School in 1973 and received his bachelor’s degree from Sioux Falls College in 1977.  Larry began his educational career with two years in Vermillion before accepting a Social Studies position at Sioux Falls O’Gorman, where he assisted his high school basketball coach Don Barnes.  Ball earned a master’s degree in Secondary Administration from Northern State while assisting basketball coach Bob Wachs.  After a year at Waverly High School, Ball served as secondary principal at Wessington Springs for five years, and an administrator in the Groton School District for seven years.  Ball concluded his career as Principal and Athletics Director for the Jones County School District until his retirement in 2019.  Larry was a member and Chairperson of the SDHSAA Board (2004-09), and a recipient of the NIAAA Award of Merit.

Mark Meile graduated from West Central High School in 1974 and earned his bachelor’s degree from USD Springfield and a 1992 Master’s Degree from SDSU in Athletic Administration.  Meile taught and coached at Viborg, Bridgewater, Salem and Brandon Valley, including 14 years as head boys’ basketball coach.  He was a Basketball Coach of the Year finalist on four occasions.  Meile’s final 27 years was in administration – two years as athletics director at Roosevelt High School and 25 years as Sioux Falls Public Schools Coordinator of Athletics & Physical Education.  Mark served on the SDHSAA Tennis Advisory Committee and as a SDIAAA Region Representative.  Mark was a SDHSAA Tournament Director for more than 100 state championships.  Meile was honored with the 2013 NIAAA State Award of Merit and as 2014 SDHSCA Athletic Director of the Year.