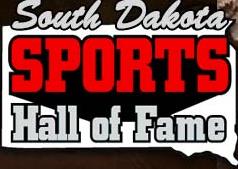 (Sioux Falls, SD) The SDSHoF banquet and induction ceremony will be Sunday, September 25, at the Sioux Falls Convention Center. Ticket information will be available later. This year’s class is a great cross section of players, coaches and contributors. Inductees include people from border to border in the state who took part in a variety of sports.

Honorees (in alphabetical order) Janel Birrenkott from Lemmon was a basketball star at Northern State and shined on the national stage with the USA Deaf Team. Bryan Brewer was a long-time Pine Ridge coach and administrator who help create the Lakota Nation Invitational events. Jill Christensen has won more games as a high school head coach than anyone in South Dakota history, establishing a dominating volleyball program at Parker.

Doug Clark of Sioux Falls served for years as a flagman for the highest profile sprint car races in the country and becomes only the second inductee who has been inducted for motor sports. Dr. Kathie Courtney of Aberdeen was a pioneer in the field of athletic training and has been recognized for her leadership on a national level. Gary Evjen of Sioux Falls ended his basketball career at Northern State as the first college player to finish his career with more than 2,000 points and 1,000 rebounds.

Gene Johnson of Yankton was an outstanding distance runner and coach, who shared world-class workouts with South Dakotans. Augustana women’s basketball coach Dave Krauth has won more than 1,000 games at the college and high school levels. Megan Mahoney of Sturgis was a four-time All-State basketball player who enjoyed a long professional career.

Bill Mathews played college football for the SDSU Jackrabbits and then seven years in the NFL and USFL. Alan Miller led Stickney to the State B basketball title before becoming a three-time All-American at Dakota Wesleyan. Tom Rudebusch has probably broadcast more radio play-by-play games than any person in the state. The longtime voice of South Dakota School of Mines and Technology also called more than 1,300 Rapid City Post 22 baseball games over 41 seasons.

Jeff Schemmel of Madison was the first native South Dakotan to break the four-minute mile mark in track. Paul Tierney of Oral is a cowboy legend and is in the National Rodeo Hall of Fame. Vince Whipple of Rapid City was an outstanding all-around athlete in Rapid City who went on to star in basketball at Huron College and became a major organizer and successful coach of athletics in West River.

The South Dakota Sports Hall of Fame is run by a committee of about 30 volunteers from across the state. It was started by the South Dakota Sportswriters in 1969, and this year’s class brings the total of inductees to 314. There is currently a video display at the Premier Center in Sioux Falls. Bios and pictures of each past inductee is available at www.sdshof.com.  For more information, including contact info for the inductees, contact Executive Secretary Jim Dorman at 605-940-1262, or Mike Henriksen at 605-595-8487.