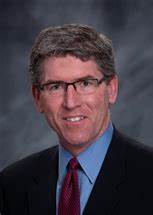 Dan Duffy (SCHS ’79), who led Stanley County to a 3rd place finish in the 1978 State B Basketball Tournament, has been named to the South Dakota Intercollegiate Conference Hall of Fame.  An induction ceremony was held April 2, 2022, in Madison, SD.  Duffy is known as one of the all-time great outside shooters in South Dakota high school and college basketball history.

Dan Duffy displayed great skill on the basketball court, but fans most likely remember Duffy best for his shooting ability. This was certainly proven by the time Duffy ended his basketball career with a 15.9 scoring average and with 1,746 career points, placing him eighth on Dakota Wesleyan University’s all-time scoring list. Duffy also set five school scoring records: 10 three-point field goals in a game, 130 three-point field goals in a season, 50.2 percent three-point field goal accuracy in a season, 50.2 percent three-point field goal accuracy in a career and 86.5 percent free throw accuracy in a career. Amazingly, all of Duffy’s three-point records were set in just one season since the three-point basket was not established until 1982, Duffy’s senior year. Duffy was a four-year starter and a three-time South Dakota Intercollegiate All-Conference selection. He received national recognition twice by being selected an Academic All-American. In 1983, Duffy was the recipient of the Emile S. Liston Award, an award given each year to the National Association of Intercollegiate Athletics Student Athlete of the Year. Duffy was only the second DWU athlete in history to receive this honor.