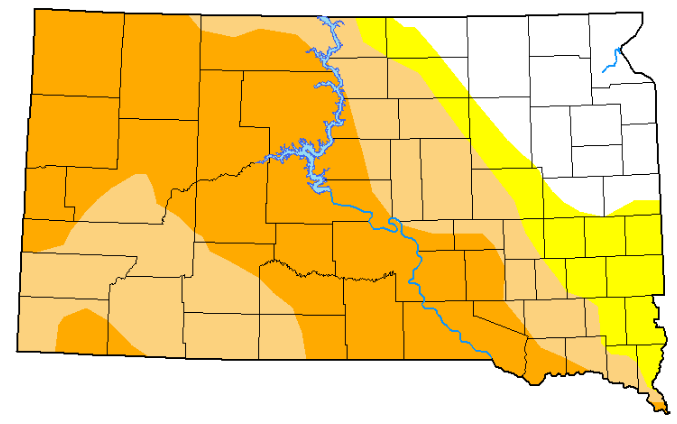 PIERRE — Drought across South Dakota expands considerable with last week’s update of the U-S Drought Monitor. The prior week, severe drought was in the northwest part of the state, extending to the Pierre area. The Thursday update shows D-2 level drought growing through the Missouri River Valley and central South Dakota. Severe drought is depicted in Ziebach, Dewey, Stanley, Hughes, Jones, Lyman, Brule and Tripp Counties. All but the far southwest corner of Haakon County is in severe drought along with northeast Jackson, most of Mellette and Hughes, Sully and Potter Counties west of U-S Highway 83 and Buffalo County south of state highway 34. Moderate drought is showing in eastern Potter, Sully and Hughes along with northern Buffalo and Hand and Hyde Counties along with much of Jackson and southwest Haakon and Mellette Counties.