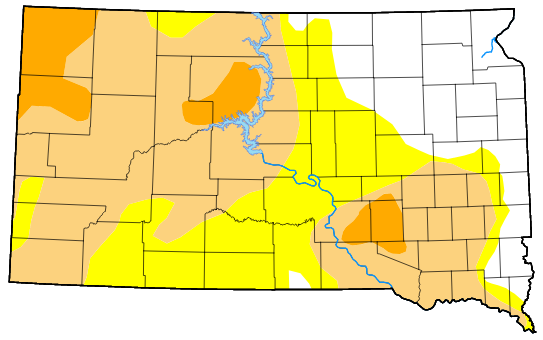 PIERRE — The U-S Drought Monitor for South Dakota is showing significant improvement across central South Dakota. An area of severe drought has been removed from central South Dakota and now sits in eastern Dewey and southeast Ziebach County. Other areas of severe drought include Harding and Butte and eastern Brule, Aurora, northern Douglas and south central Jerauld Counties. Moderate drought is depicted in western Potter, Sully, Hughes, most of Stanley, north and west Jones, north and central Jackson, Haakon, much of Ziebach and Dewey Counties. Much of Brule and the boot heel of Lyman County are also in moderate drought. Abnormally dry conditions are in place for most of Lyman and Jones, eastern Hughes, Sully and Potter and all of Buffalo, Hyde and Hand Counties. Areas of no drought are expanding west from northeast into north central South Dakota.