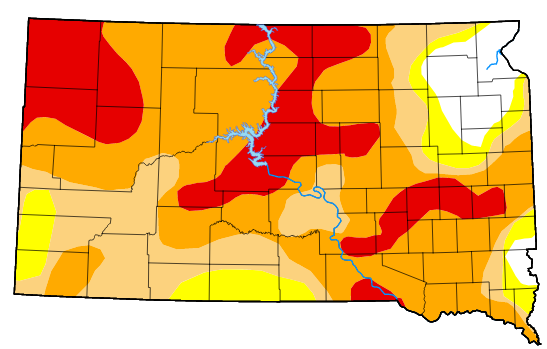 PIERRE — Heavy rains in mid to late August are being reflected on the U-S Drought Monitor in South Dakota. Lyman County has seen the most improvement among central South Dakota Counties with moderate drought replacing severe drought in all but the far west and southeast parts of the county. The pocket of moderate drought extends from Lyman County into far western Brule and Buffalo Counties and southern Hyde County. A band of extreme drought still extends from Haakon County northeast into north central South Dakota, but that band has been narrowed and cut into in Edmunds and Faulk Counties. A ribbon of extreme drought still extends from southern Brule County to southern Beadle and Kingsbury Counties and over to Lake County. Heavy rain in the northeast has eliminated drought in Roberts, Day, Codington, and parts of Clark, Marshall, Hamlin and Deuel Counties.