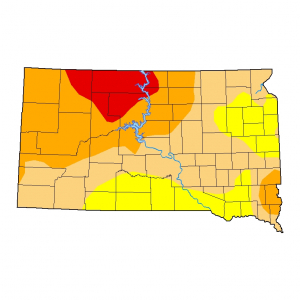 PIERRE — Extreme drought conditions have returned to South Dakota. Extreme drought is considered level D-Three and its showing up in sections of Ziebach and Dewey County. It’s an extension of extreme drought from North Dakota and includes Corson and parts of Perkins, Campbell and Walworth County. D-Two Severe drought is noted in the rest of Dewey and Ziebach Counties along with Potter, Sully, northwest Hyde, most of Stanley and northern Haakon County. Moderate D-One drought being seen in southern Haakon, most of Jackson, Jones, Hyde and Lyman County: all of Hughes, Hand, Buffalo and Brule County. Southeast Jackson, Mellette and Tripp County are listed as being abnormally dry. A second area of severe drought is located in southeast South Dakota.