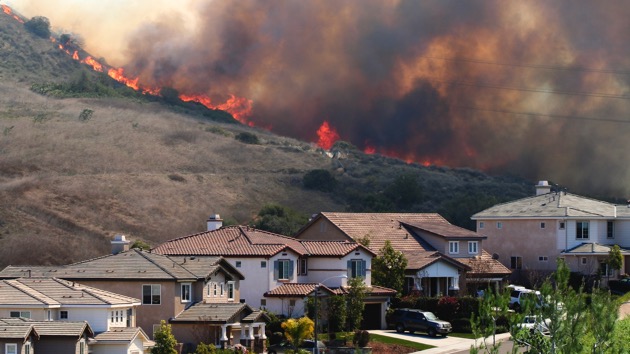 (LOS ANGELES) — ​Climate change is making wildfires in the western United States larger and more destructive, and the effects are felt across the country, according to a study by Steve Davis, a professor of Earth systems science at the University of California Irvine.

Davis ran a study looking into the cost of wildfires, which was published in the journal Nature Sustainability.

According to Davis, “It’s not just relegated to California, there’s places beyond California that are being affected.”

The research also considers more than just the cost of destruction. It includes the price of health care for smoke inhalation from the fires, people missing work and supply chain issues nationwide from products coming from California.

His team found the cost of the 2018 wildfire season to have totaled about $150 billion in losses. That amounts to .7 percent of the gross domestic product of the U.S.

Davis says, “If we continue to have these kinds of wildfire seasons, the costs are going to maintain themselves.”

In 2021, living in California means an almost year-round threat of wildfires.

According to CAL Fire, wildfires are a natural part of California’s landscape. Yet the fire season in California and across the West is starting earlier and ending later each year.

They say climate change is considered a key driver of this trend with warmer temperatures, less rainfall and a more intense dry season all contributing to more severe wildfires.

Since 2017, wildfires have broken all-time size and destruction records consistently.

CAL Fire’s Top 20 Largest California Wildfire statistics show the top eight largest in the state’s history have all happened in the last five years. This includes the August Complex, which burned 1,032,648 acres of land alone.