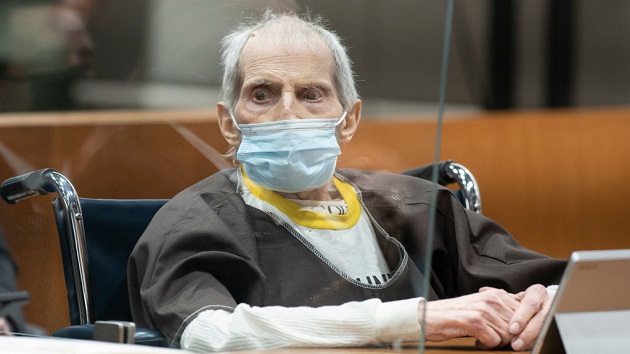 (NEW YORK) — Robert Durst has been charged in Westchester County with the murder of his former wife, Kathie, who disappeared in 1982, according to the district attorney’s office.

A criminal complaint was filed Tuesday of this week.

“The Westchester County District Attorney’s Office can confirm that a complaint charging Robert Durst with the murder of Kathleen Durst was filed in Lewisboro Town Court on Oct. 19, 2021. We have no further comment at this time,” a statement from a spokesperson for Westchester DA Mimi Rocah said.

The single-page complaint from New York State Police Investigator Joseph Becerra charges Durst with second degree murder. It offers no new evidence but is based on “the files” of the state police, the Westchester DA’s office and the Los Angeles DA’s office, along with “conversations with numerous witnesses and observations of defendant’s recorded interviews and court testimony.”

The complaint follows last week’s sentencing in Los Angeles of Durst to life in prison for the 2000 murder of Susan Berman, an associate whom prosecutors said Durst killed because he feared she would have revealed details of Kathie Durst’s death.

It wasn’t immediately clear whether Durst had retained an attorney in New York. A call to his longtime attorney Dick DeGuerin was not immediately returned.

Durst, 78, recently tested positive for COVID-19 and was put on a ventilator, DeGuerin has said. He appeared frail during his murder trial in Los Angeles and sat in a wheelchair during his sentencing.

Kathie Durst’s body has never been found, though authorities have periodically searched over the years. There was never an established crime scene.

“Robert Durst has now been formally charged with the murder of Kathleen McCormack Durst. We are very happy with this development. At this time, however, we will not be making any further comments until the Grand Jury process is completed,” said Robert Abrams, attorney for Kathie Durst’s family.

Robert Durst, eldest son of Seymour Durst, has long been estranged from his wealthy family. He was acquitted of a second murder in Galveston, Texas.

This is a developing story. Please check back for updates.