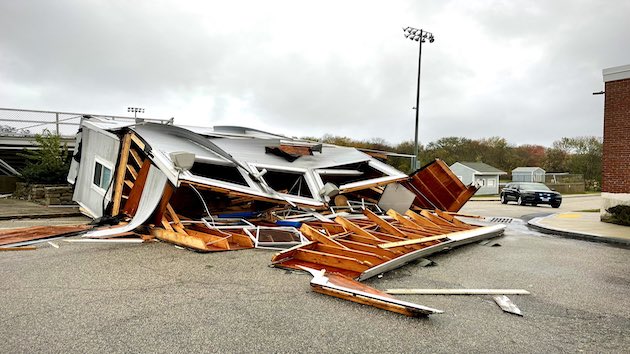 (NEW YORK) — Nearly 600,000 customers are without power in New England Wednesday after a powerful, record-breaking nor’easter lashed the Northeast.

One person was killed in Morris Township, New Jersey, when a tree limb fell on two cars Wednesday morning, according to ABC New York station WABC.

A kayaker also was found dead off the coast of the Bronx, reported WABC. The 45-year-old man had headed out on the water Monday night, around when the storm started, en route from Long Island to Westchester County, New York.

Brant Rock in Marshfield right now. @kellyannwx tells me gusts of up to 44mph so far. The peak winds of this Fall Nor’easter is expected overnight @WCVB #wcvb pic.twitter.com/RBtEMZ6aG3

The storm became a “bomb cyclone” when its pressure dropped 24 millibars in less than 24 hours. In Nantucket, Massachusetts, the nor’easter set a record for the lowest pressure ever recorded in October.

The heavy rain should be ending in most of the Northeast on Wednesday, but the winds will continue to roar up to 60 mph from Long Island to Massachusetts to Maine. By 7 p.m., wind gusts could still reach near 50 mph in Massachusetts.

In Massachusetts, where about 500,000 customers remained without power Wednesday afternoon, Gov. Charlie Baker said he expects a “multi-day” restoration process.