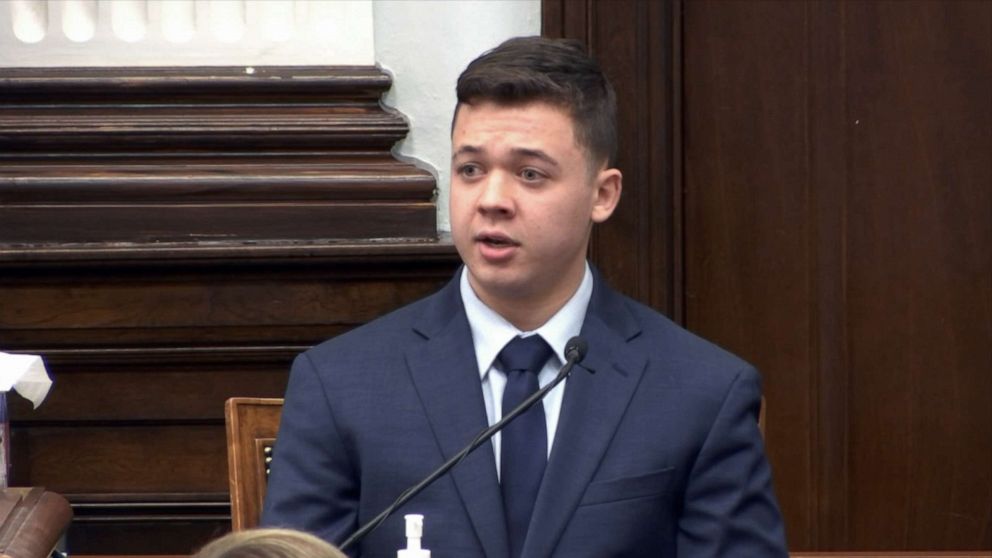 (KENOSHA COUNTY, Wisc.) — Kyle Rittenhouse took the witness stand on Wednesday to testify in his own defense and broke down in sobs as he began to describe shooting three men, two fatally, in what he claimed was an act of self-defense.

Rittenhouse began testifying in a Kenosha County courtroom after telling a judge that he made the decision to do so after consulting with his lawyers.

In his hourslong testimony, the 18-year-old spoke of his background as a trained lifeguard, a fire department EMT cadet and a student studying nursing at Arizona State University.

“Did you come to downtown Kenosha to look for trouble?” his attorney, Mark Richards asked.

Rittenhouse, wearing a blue suit and matching tie, answered, “No.”

Rittenhouse said he went to Kenosha with his sister and friends on Aug. 25, 2020, after seeing online pleas for people to come to the city to help protect it after looting and vandalism broke out over a police shooting of Jacob Blake, a 29-year-old Black man who was left paralyzed.

“I went down there to provide first aid,” Rittenhouse testified, adding that he brought along his medical supplies as well as his AR-15-style semi-automatic rifle.

“I didn’t intend to kill them. I intended to stop the people who were attacking me,” Rittenhouse repeatedly testified during his testimony.

‘I hear somebody yell, ‘Burn in hell”

Richards directed Rittenhouse to the event of the Aug. 25, 2020, shooting. He testified that he had witnessed a police officer being hit with a brick, another man getting his jaw broken and had been allegedly threatened by Rosenbaum.

He said he got separated from his friends who were guarding three car lots that had been vandalized. He said he was rushing to put out a fire at one of the car lots when he again encountered Rosenbaum and a man named identified by prosecutors as Joshua Ziminski.

“I hear somebody scream ‘Burn in hell,” said Rittenhouse of when he reached the car lot that was being vandalized. “I reply with ‘Friendly, friendly, friendly to let them know hey, I’m just here to help. I don’t want any problems. I just want to put out the fires if there are any.”

Rittenhouse testified that Ziminski pulled a gun and pointed it at him when he approached the car lot with a fire extinguisher.

“As I’m walking towards to put out the fire, I dropped the fire extinguisher and I take a step back (from Ziminski),” Rittenhouse said. “My plan was to get out of that situation.”

But he said before he could get away, Rosenbaum was allegedly bearing down on him and Ziminski and three other people were blocking his path.

“Once I take that step back, I look over my shoulder and Mr. Rosenbaum was now running from my right side, and I was cornered from in front of me with Mr. Ziminski,” Rittenhouse said.

Rittenhouse then began to break down in sobs on the witness stand, prompting Judge Bruce Schroeder to call a recess.

Following the recess, Rittenhouse returned to the witness stand.

He picked his testimony back up at when he saw Rosenbaum charging toward him.

“Mr. Ziminski stepped towards me. I went to go run south,” Rittenhouse said.

He said as Rosenbaum began to chase him, he heard Ziminski allegedly tell Rosenbaum “to get him and kill him.”

“As I’m running in that southwest direction, Mr. Rosenbaum throws, at the time I know it’s a bag now,” Rittenhouse said, adding that he initially thought it was a heavy chain Rosenbaum had been seen carrying earlier in the evening.

“I turn around for about a second while continuing to run and I point my gun at Mr. Rosenbaum,” Rittenhouse said.

Richards asked, “Does that stop him from chasing you?”

Rittenhouse replied, “It does not.”

He said Rosenbaum continued to “gain speed” on him and then he heard a gunshot from behind him.

Rittenhouse said Rosenbaum lunged at him.

“I remember his hand on the barrel of my gun,” Rittenhouse said.

Richards asked, “As you see him lunging for your gun, what do you do?”

Rittenhouse answered, “I shot him.”

‘I was defending myself’

He said people in the car lot quickly scattered when he fired four shots at Rosenbaum. He said he tried to go and help Rosenbaum, but as people started to surround them again, he heard individuals screaming, “Get his a–, get his a–. Get him, get him, get him.”

He said he immediately called a friend, Dominick Black, who came with him to Kenosha and told him that he had just shot someone.

“I had to shoot him,” Rittenhouse said he told Black.

He said he started to run in the direction he thought the police were positioned.

Richards asked, “Why were you trying to get to the police?”

Rittenhouse responded, “Because I didn’t do anything wrong. I was defending myself.”

Shooting of Huber and Grosskreutz

“I get lightheaded. I almost pass out and I stumble and hit the ground,” Rittenhouse said.

He said people quickly surrounded him and he pointed his gun at them and they backed off, except from one unidentified man who kicked him in the face. He said he fired two shots at the man and missed.

“I thought if I were to be knocked out … he would have stomped my face in if I didn’t fire,” Rittenhouse said.

He testified that Huber allegedly ran up to him as he was trying to sit up and struck him in the neck with his skateboard.

“He grabs my gun, and I can feel it pulling away from me, and I could feel the strap starting to come off my body,” Rittenhouse said. “I fire one shot.”

Rosenbaum was struck in the chest and died at the scene, prosecutors said.

He said he lowered his weapon and then saw Grosskreutz in front of him with his hands up.

“As I’m lowering my weapon, I look down and then Mr. Grosskreutz, he lunges at me with his pistol pointed directly at my head,” Rittenhouse said, adding they were so close that their feet were touching.

He said Grosskreutz held his hands in the air and looked at him.

Grosskreutz testified that he was shot in the bicep, causing him to retreat and yell for a medic.

He said the officer responded by telling him to get back and threatened to use pepper spray on him.

The teenager said he then went back to one of the Car Source car lots he had been helping to guard and spoke to the group of allies who were locked inside.

“I’m in shock. I was freaking out. I was just attacked. My head was spinning,” Rittenhouse said.

He said when he arrived at the police station, “I had to tell them that I was involved in a shooting in Kenosha and I needed the Kenosha detectives.”

‘I didn’t intend to kill them’

Prosecutor Thomas Binger then began cross-examining Rittenhouse by asking, “Everybody that you shot that night, you intended to kill, correct?”

Rittenhouse answered, “I didn’t intend to kill them. I intended to stop the people who were attacking me.”

“By killing them?” Binger pressed Rittenhouse.

The teenager responded, “I did what I had to do to stop the person who was attacking me.”

Binger began to ask Rittenhouse about sitting in court for the eight days of trial and having heard all of the 30 sum odd witnesses and view multiple videos that captured the shootings.

“And after all of that, you are telling us your side of the story, correct?” Binger asked.

Schroeder then stopped the questioning and after sending the jury out of the courtroom, Richards objected to Binger’s questioning, telling the judge, “He’s commenting on my client’s right to remain silent.”

Schroeder agreed, telling Binger, “You need to account for this.”

Binger responded, “No, your honor, I am making the point that after hearing everything in the case, now he’s tailoring his story to what has already been introduced.”

Schroeder warned Binger that it was a “grave constitutional violation” to talk about Rittenhouse’s silence until now.

“You’re right on the borderline and you may be over it,” Schroeder said. “But it better stop. This is not permitted.”

When Binger’s cross-examination resumed, he began to ask Rittenhouse about his use of deadly force.

“You’d agree with me that we’re not allowed to use deadly force to protect that Car Source building?” Binger asked.

Binger then asked Rittenhouse about an incident 10 days before the shooting.

“But yet you have previously indicated that you wished you had your AR-15 to protect someone’s property?” Binger asked.

Richards immediately objected, saying Schroeder had not ruled on the admissibility of the previous act.

When the judge sent the jury out of the courtroom again, Richards suggested that Binger was “attempting to provoke a mistrial.”

“I ask the court to strongly admonish him (Binger) and the next time it happens I’ll be asking for a mistrial with prejudice,” Richards said.

Binger claimed that he believed the “court left the door open” on the matter, prompting an angry and loud response from the judge.

“For me, not for you,” Schroeder shouted. “You should have come and asked for reconsideration.”

Schroeder continued, “I was astonished when you began your examination by commenting on the defendant’s post-arrest silence. That’s basic law. It’s been basic law in this country for 40 years, 50 years.”

Why didn’t you just go home?

Following a lunch break, Binger continued his cross-examination of Rittenhouse, questioning him about his actions before the shootings and whether he would describe the protesters on the streets that night as hostile.

Rittenhouse said he didn’t believe the crowd was hostile toward him or his group. But after Binger played a video of the crowd setting a Dumpster on fire and chanting to Rittenhouse and others protecting the car lots to “protect the property, not the street.”

But Rittenhouse said that he once went into the street to retrieve a dumpster that had been taken from one of the Car Source properties and set on fire.

“Would you agree that the crowd was reacting to members of your group going out in the street and trying to interfere with what was going on off your property?” Binger asked.

Rittenhouse answered, “I didn’t think they were happy about it, no.”

Binger noted that police moved the crowd south past the Car Source lot where Rittenhouse and his group were and set up a demarcation line at 60th Street in Kenosha.

Rittenhouse agreed with Binger that once the police moved the crowd south there appeared to be no more threat to the Car Source location.

“So why not go home at that point?” Binger asked.

Rittenhouse said he stayed to help provide first aid to anyone in need.

Binger noted that despite the threat being apparently eliminated from the business he was protecting by police moving the crowd south, Rittenhouse ventured south of the demarcation line at 60th St. armed with his rifle and accompanied by another man, Ryan Balch, an armed military veteran.

Rittenhouse said he was looking for people who needed first aid when he and Balch got separated, leaving him isolated in the crowd Binger said appeared hostile.

“You are now entering a crowd of whatever you want to call them, protesters, demonstrators. Your attorneys called them rioters, or looters, or whatever. That’s who you’re now going to be part of. You’re going to be in that crowd, right?”

Rittenhouse responded, “I was walking through. I announced myself as friendly and that I was there to help them.”

The defense has three more witnesses to call before they will rest their case. Closing arguments could come Friday or Monday.