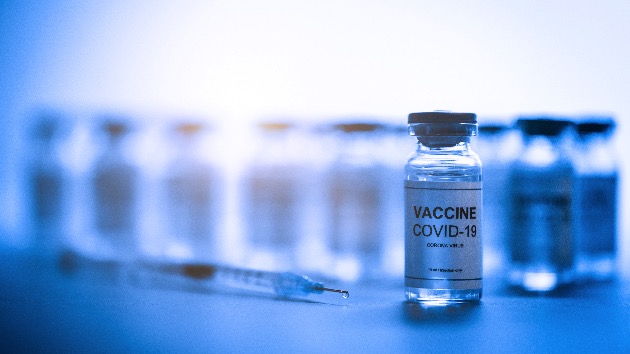 More than 659,000 Americans have died from COVID-19 while over 4.6 million people have died from the disease worldwide, according to real-time data compiled by the Center for Systems Science and Engineering at Johns Hopkins University.

Just 63% of Americans ages 12 and up are fully vaccinated against COVID-19, according to data from the Centers for Disease Control and Prevention.

A federal judge issued a temporary restraining order that ordered Iowa officials to stop enforcing a law passed in May that prevents school boards from enforcing mask mandates.

Judge Robert Pratt said the parents who are suing Gov. Kim Reynolds and state and local education offices, have demonstrated that an “irreparable harm exists,” if masks aren’t used and required.

The judge said he looked at data on the effectiveness of masks to reduce the spread of the coronavirus and agrees with recommendations from the Centers for Disease Control and Prevention and the American Academy of Pediatrics on mask wearing in schools.

The order will stay in effect until the court issues an order for a preliminary injunction.

The U.S. daily death average has now surged to nearly 1,200 — six times the death average of 191 from two months ago, according to federal data.

On Friday alone, the U.S. reported approximately 1,860 COVID-19 deaths — the highest single-day figure in nearly seven months, though that figure may partially be the result of data backlogs from the holiday weekend.

Even with current data still skewed from last week’s holiday, this summer’s surge has far surpassed the figures from last summer, and national case metrics are about four times higher than one year ago, according to federal data.

More than 243,000 children tested positive for COVID-19 last week, marking the second-highest week ever for pediatric cases, according to a new report from the American Academy of Pediatrics and the Children’s Hospital Association.

Last week, children accounted for 28.9% of the cases. Children make up 22.2% of the population.

Across the U.S., approximately 2,200 kids are in hospitals for COVID-19. Texas currently leads the country with 377 children receiving care, followed by Ohio with 258 children and Florida with 168 children.

Cases among kids rose “exponentially” this summer, the organizations wrote, and in the last month alone, the U.S. has reported more than 1 million pediatric cases.

More than 1.2 million children have tested positive since they returned to classrooms in late July.

Severe illness due to COVID-19 remains “uncommon” among children, the two organizations wrote in the report. The AAP and CHA, however, warned that there is an urgent need to collect more data on the long-term consequences of the pandemic on children, “including ways the virus may harm the long-term physical health of infected children, as well as its emotional and mental health effects.”

Sep 13, 10:11 am
Students back in classrooms in nation’s largest school district

In New York City — the largest school district in the U.S. — students are returning to the classroom on Monday.

This marks the first day all students and staff are in-person since the pandemic began.

In Union County, North Carolina, the school board voted Monday to end quarantines and contact tracing, meaning students can go to school even if they’ve been in close contact with someone who tested positive, ABC Charlotte affiliate WSOC reported.

Students and staff can only stay home if they test positive or have symptoms, WSOC said.

The U.S. Centers for Disease Control and Prevention released its latest vaccine numbers Sunday afternoon and revealed that over 209.2 million Americans 12 and older have received a COVID-19 vaccine dose.

That represents 73.8% of all Americans 12 and older, the agency said.

In 13 states, over 80% of the population has at least one dose, CDC data shows.

More than 40.9 million COVID-19 cases have been confirmed in the U.S. since the pandemic began, according to Johns Hopkins University’s Coronavirus Resource Center.

And more than 659,000 Americans have been killed by the virus.

The city of West Hollywood, California, issued an emergency executive order Friday requiring patrons to show proof of COVID-19 vaccination to enter the indoor portions of businesses such as restaurants, bars and gyms.

The order comes “as the transmission rate of the COVID-19 delta variant remains high in Los Angeles and throughout the entire nation,” the city said in news release.

Anyone 18 or older must show proof of vaccination prior to entering “any indoor portion of a facility, subject only to certain exceptions.” The requirement should be enacted “as soon as possible but no later than Oct. 11,” according to the order.

Individuals who do not provide proof of full vaccination will be allowed to use outdoor portions of business facilities.

Other businesses affected by the order include nightclubs, theaters, cannabis consumption lounges and entertainment venues as well as yoga studios and tattoo parlors.

Employees 18 and older and all affected businesses must “ensure all staff who routinely work onsite provide proof of full vaccination before entering or working in any indoor portion of the facility” by Nov. 1.

Sep 11, 3:01 pm
74 million in US eligible for vaccine but remain unvaccinated

Still, many are flocking to get their shots with “+903K doses reported administered over yesterday’s total,” Shahpar said, with 395,000 of them being new vaccinations.

In a statement to ABC News, Sylvia Wood, a spokesperson for Spring Independent School District, said the district had yet to be served and had no details about the lawsuit beyond a press release.

“Spring ISD will let the legal process unfold and allow the courts to decide the merits of the case,” Wood said.

Elgin Independent School District Superintendent Jodi Duron also told ABC News the school district had not been served yet, and that schools in Travis County, part of Elgin ISD, are required to have students wear masks. “To the District’s knowledge, the Travis County Order has not been suspended,” she said.

Round Rock Independent School District spokesperson Jenny LaCoste-Caputo told ABC News the school district is following Texas Education Agency guidance that allows for mask requirements “for adults or students for whom it is developmentally appropriate” and is working with local authorities “who advise us that masks remain an essential tool in stemming the spread of COVID-19 in our classrooms.”

Sherman Independent School District told ABC News in a statement that it had not received any information on the lawsuit yet and for now “will continue to focus on promoting a safe and healthy learning environment for our students and staff.”

ABC News has reached out to the other school districts for comment.

Nearly 90 school districts currently have mask mandates, according to a list compiled by Paxton’s office. The attorney general anticipates more lawsuits if school districts “continue to defy state law,” his office said in a statement.

Several school districts have sued the state to challenge the ban on mask mandates.

Last week, the Texas Education Agency said it is not enforcing the governor’s executive order “as the result of ongoing litigation.”