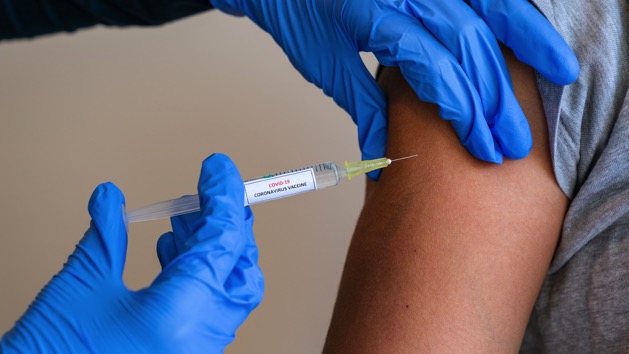 (NEW YORK) — As the COVID-19 pandemic has swept the globe, more than 4.9 million people have died from the disease worldwide, including over 736,000 Americans, according to real-time data compiled by Johns Hopkins University’s Center for Systems Science and Engineering.

Just 67.2% of Americans ages 12 and up are fully vaccinated against COVID-19, according to data from the U.S. Centers for Disease Control and Prevention.

The five states with the highest death rates over the last week — Wyoming, Montana, Alaska, West Virginia and Idaho — are also among the states with the lowest full vaccination rates, according to federal data.

Approximately 63.2 million eligible Americans have yet to get the shot, according to federal data.

But hospitalization rates are continuing to steadily trend down, with just over 51,000 Americans now hospitalized with the virus, compared to 104,000 people hospitalized in late August, according to federal data.

Oct 26, 9:11 am
FDA panel hours away from vote on Pfizer vaccine for kids

An independent FDA advisory panel on Tuesday will debate and vote on whether to authorize the Pfizer vaccine for children ages 5 to 11. The nonbinding vote is expected between 4:30 p.m. and 5 p.m. ET.

Pfizer data submitted to the FDA has shown that this vaccine, which would be administered to children at one-third of the adult dosage, is nearly 91% effective against symptomatic COVID-19. There were no reported adverse side effects in the clinical trial group.

After the panel votes on whether or not to recommend this vaccine for children 5 to 11, the FDA will make a decision.

Then, the matter heads to the CDC’s independent advisory panel to deliberate and vote, which is scheduled for Nov. 2 and Nov. 3. Once the CDC panel votes, CDC Director Rochelle Walensky is expected to make the final sign-off.

The earliest shots could be in arms is the first week of November.

Oct 26, 8:14 am
US sees 7th straight week of drop in daily pediatric cases

The past week marked the seventh consecutive week that the United States has seen a drop in pediatric COVID-19 infections since the pandemic peak of nearly 252,000 cases in early September.

Last week, the U.S. reported approximately 118,000 new COVID-19 cases among children, compared to 131,000 cases the previous week, according to a weekly joint report from the American Academy of Pediatrics (AAP) and the Children’s Hospital Association (CHA).

But even with the decline, children still accounted for about a quarter of reported weekly COVID-19 cases. People under the age 18 make up roughly 22% of the U.S. population. Regionally, the Midwest continues to see the highest number of pediatric COVID-19 cases as the area experiences the beginnings of a viral resurgence.

The AAP and CHA wrote in the report that the case rate remains an “extremely high number” of newly diagnosed children, with over 1 million cases added over the past six weeks.

Since the onset of the pandemic, nearly 6.3 million children across the nation have tested positive for COVID-19.

Currently, severe illness due to COVID-19 remains “uncommon” among children, the two organizations wrote in the report. According to the nearly two dozen states that reported COVID-19 hospitalizations among children, 0.1% to 2% of all pediatric COVID-19 infections resulted in hospitalization. ​Similarly, in states that reported virus-related deaths by age, 0% to 0.3% of all child COVID-19 cases resulted in death.

However, AAP and CHA warned in the report that there’s an urgent need to collect more data on the long-term consequences of the pandemic on children, “including ways the virus may harm the long-term physical health of infected children, as well as its emotional and mental health effects.”

Less than 45% of adolescents ages 12 to 17 have been fully vaccinated against COVID-19, according to federal data, and more than 48 million children under 12 remain unvaccinated. But that could soon change, should the Food and Drug Administration and the Centers for Disease Control and Prevention green light COVID-19 vaccinations for kids ages 5 to 11 in the coming weeks.

Moderna announced Tuesday that it will make up to 110 doses of its COVID-19 vaccine available to African nations at the company’s “lowest tiered price.”

“All doses are offered at Moderna’s lowest tiered price,” the company said in a press release Tuesday.

Africa, the world’s second-largest and second-most populous continent, remains the least-vaccinated region of the world against COVID-19, with just over 5% of its 1.3 billion people fully inoculated.

Moderna CEO Stephane Bancel said the new agreement with the African Union, a continental bloc consisting of the 55 member states that make up the countries of Africa, was facilitated in part by the White House. The deal is separate from the company’s agreement with the global vaccine-sharing initiative COVAX to supply up to 500 million doses from late this year through 2022, according to the press release.

“This is the first step in our long-term partnership with the African Union,” Bancel said in a statement Tuesday. “We believe our vaccine can play an important role in addressing the needs of low-income countries given its combination of high Phase 3 efficacy against COVID-19, strong durability in the real-world evidence, and superior storage and handling conditions. We recognize that access to COVID-19 vaccines continues to be a challenge in many parts of the world and we remain committed to helping to protect as many people as possible around the globe.”

Moderna is also working on plans to allow it to fill doses of its COVID-19 vaccine in Africa as early as 2023, in parallel to building an mRNA vaccine manufacturing facility on the continent with the goal of producing up to 500 million doses each year, according to the press release.

Two South Florida school districts may be changing their polices on mask mandates in schools as COVID-19 cases decline.

A Broward County Public Schools spokesperson told ABC affiliate WPLG that an item could be added at a school board meeting Tuesday “regarding district’s COVID-19 protocols including the use of face coverings.”

The district had said it would revisit the mask mandate when the COVID-19 positivity rate reached 3% or lower for 10 consecutive days. Broward County has reached that threshold, the county’s health department data shows.

Miami-Dade County Schools Superintendent Alberto Carvalho also indicated there may be a change to its mask mandate policy.

The school board is looking at several metrics including hospital admissions, community transmission and daily student cases. Carvalho said Friday would be a benchmark day.

Carvalho said last week that a new plan could entail “a mandatory mask policy but with an unrestricted, unrestricted, parent opt-out provision.”

The European Medicines Agency on Monday approved the Moderna booster (which is a half dose of the initial booster) for people 18 and older.

The federal government on Monday released more details about how foreign tourists and other non-citizen, non-immigrant people flying to the U.S. can comply with recently-announced rules requiring them to be fully vaccinated.

These rules go into effect on Nov. 8.

People will be able to submit proof of vaccination to airlines electronically or via paper, an official said.

All vaccinated people — Americans and non-Americans — need to show proof of a negative test taken within three days before departure.

For unvaccinated people — both Americans and non-Americans — you need to show proof of a negative test within one day before. Children ages 2 to 17 must take a test but those under 2 don’t need to test.

Vaccine exemptions include: children under 18; some medical exemptions; and people traveling on non-tourist visas from countries with low availability of vaccines (signified by a country having a vaccination rate less than 10%). The U.S. will follow a list maintained by the WHO and these people will need have a “specific, compelling reason” for coming to the U.S., a senior administration official said.

The exemptions will represent a “very, very small number” of travelers to the U.S., a senior administration official said.

Oct 25, 10:23 am
Cases dropping across US but rising in some Midwest, Northeast states

In the last month, the daily case average in the U.S. has dropped by nearly 43% thanks to falling metrics in states like Florida, Mississippi and Louisiana, which have all seen their case averages drop by nearly 90% or more since August, according to federal data.

But in recent weeks, cases have been creeping up in several states in the Northeast and the upper Midwest, including Minnesota and Michigan.

Alaska currently has the country’s highest infection rate, followed by Montana, Wyoming, Idaho and North Dakota, according to federal data.

About 52,000 COVID-19 patients are currently hospitalized across the U.S., a major drop from the 104,000 hospitalized patients in late August.

But the U.S. death toll remains persistently high, with nearly 1,300 new deaths being reported each day, according to federal data.