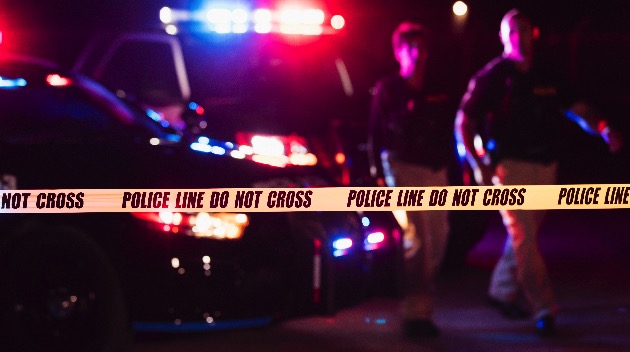 (WAUKESHA, Wis.) — At least five people were killed and more than 40 others injured on Sunday when a car plowed into a Christmas parade in Wisconsin, according to authorities.

The incident occurred at around 4:39 p.m. local time in Waukesha, about 17 miles west of Milwaukee. The vehicle allegedly associated with the incident — a red SUV — has since been recovered and a person of interest was taken into custody, Waukesha Police Chief Dan Thompson said at a press conference Sunday evening.

Thompson said an officer, who has been with the Waukesha Police Department for over 6 years, discharged their weapon in order to stop the car, but no bystanders were hit.

“I’m grateful for the first responders and folks who acted quickly,” Evers wrote on Twitter on Sunday evening.

The investigation into the event is ongoing.

An internal briefing for law enforcement from the U.S. Department of Homeland Security, obtained by ABC News, stated that investigators believe “the driver may have been fleeing from a previous crime.”

“Police have one subject in custody,” the bulletin noted, “and one remains at large.”

A senior law enforcement official told ABC News there are reports that there may have been a second person in the vehicle. Those reports have not been confirmed but police are trying to track down more information, the official said.

Multiple law enforcement sources told ABC News that the preliminary assessment of investigators, based on video evidence and interviews, is the driver was not aiming to hit the parade but rather was speeding through the route to flee an earlier incident.

Authorities spent the night scouring social media and other digital platforms associated with the person of interest, who remains in custody. So far, investigators have no reason to believe there is any connection to radicalization, extremism or the ongoing debate about the verdict delivered in the Kyle Rittenhouse’s trial last week elsewhere in Wisconsin, the sources said.

A number of people from the scene, including at least 12 children, were taken to various local hospitals, according to Thompson, who at the time only confirmed “some fatalities.” A statement from the City of Waukesha later confirmed there were five people dead and over 40 injured.

“However, these numbers may change as we collect additional information,” the city noted in the statement late Sunday night. “Many people have self-transported to area hospitals.”

Authorities are working to identify the victims and notify their next of kin.

Several of the injured, including some in critical condition, were admitted to Children’s Wisconsin in Milwaukee and Aurora Medical Center in Summit, Wisconsin, about 15 miles west of Waukesha, according to separate statements from the hospitals.

A Catholic priest, multiple parishioners and Catholic schoolchildren were among the wounded, according to Sandra Peterson, communications director of the Archdiocese of Milwaukee.

“Please join us in prayer for all those involved, their families, and those who are traumatized from witnessing the horrible scene,” Peterson said in a statement on Sunday night.

Waukesha resident Matthew Rude said he was attending the Christmas parade with his two young daughters when suddenly they heard “screams and chaos.”

“I looked over and I saw an SUV coming toward us relatively quickly, and I knew that wasn’t part of the parade and I knew something was wrong,” Rude told ABC News’ Robin Roberts in an interview Monday on Good Morning America.

“I didn’t know what was happening,” he added. “I just didn’t take my eyes off of the SUV, but at the same time I was grabbing my children.”

Rude said they then found themselves with their backs up against the wall of a building where they “hunkered down” with others who were “screaming, crying” as the car drove through the crowd.

“My main concern obviously was the safety of my children,” he said.

Waukesha County Executive Paul Farrow said he and his wife had just finished participating in the parade when they heard police sirens.

“Shortly afterward, I learned that a vehicle drove through the parade route injuring many people,” Farrow wrote in a series of posts on Twitter on Sunday evening. “This is an unspeakable tragedy, affecting us all as we work to overcome an extremely challenging two years and resume our cherished holiday traditions. Keep the families affected in your thoughts as we work to offer whatever support we can.”

Waukesha Fire Department Chief Steven Howard told reporters that his department was marching in the parade when the incident happened. A dozen local fire departments assisted in the response, according to Howard.

The City of Waukesha urged members of the community “to come together during this time and to keep the families in your prayers.”

“Many people witnessed traumatic events this evening,” the city said in a statement on Sunday night.

The Waukesha Police Department issued a shelter-in-place order on Sunday evening for those within a half-mile radius of the downtown area. The scene was marked secure later that night, according to Thompson.

Still, roads in the area will be closed for at least the next 24 hours. Public schools in Waukesha will also be closed on Monday, Thompson said.

In a statement Sunday night, the Waukesha School District confirmed that Monday’s classes were cancelled for all students and that a decision regarding Tuesday’s classes “will be determined during the day on Monday.”

“Several of our administrative staff and principals met this evening following the tragic event that occurred at the City of Waukesha Christmas Parade,” the school district said. “At this time, we are working with the police department to more fully comprehend all of the tragic details of this unfortunate event.”

The City of Waukesha said “the scene is still fluid” and that the street where the event took place will not reopen before mid-day on Monday.

“Businesses in this area should remain closed as entry and exit from Main Street will not be allowed,” the city added in its statement. “When the area is open, the City is requesting that any items for a temporary memorial be placed at Veterans Park.”

A spokesperson for the Federal Bureau of Investigation told ABC News that the agency’s Milwaukee field office “is aware of the reporting of an incident in Waukesha.”

“The local and state authorities are leading the response,” the FBI spokesperson said.

U.S. President Joe Biden was briefed on the Waukesha incident on Sunday night, according to the White House.

A White House official told ABC News that they are “closely monitoring the situation in Waukesha.”

“Our hearts go out to everyone who has been impacted by this terrible incident,” the official added. “We have reached out to state and local officials to offer any support and assistance as needed.”