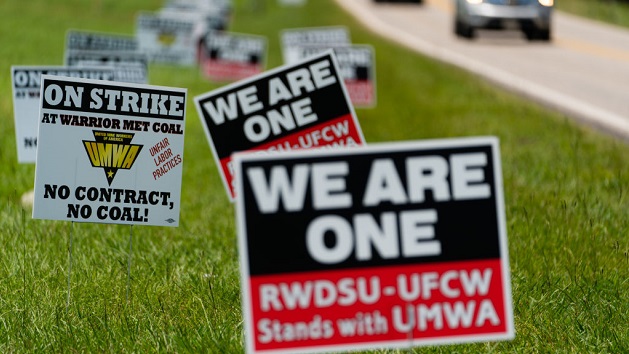 (BROOKWOOD, Ala.) — Coal miners in Alabama have been striking for months, and they aren’t backing down, battling not just for their rights as workers, but for what some believe to be the rights of working people across the country.

Over 1,000 employees of Warrior Met Coal have been on strike since April, refusing to work at the metallurgical coal mine in Brookwood, Alabama until their contract is renegotiated to provide fairer wages and health and time-off benefits. The strike, the first in four decades, has fiercely divided the small community – while some picket, others are still going in to work.

“Once you’ve crossed a picket line, I have nothing to say to you,” said Haeden Wright, the United Mine Workers of America’s local auxiliary president and wife of Braxton Wright, a striking miner.

While the miners hold the picket line, Haeden Wright has been working with other miners’ spouses to help support the so-called strike families. She’s been helping to run the pantry, which is supported through donations and includes everything from clothes to baby hygiene products.

“She holds the family together,” Braxton Wright told ABC News. “She holds the pantry together. She’s been real supportive and strong throughout this whole strike and I couldn’t be prouder of her.”

Braxton Wright has been working at the mine for 17 years, carrying on a family legacy. In some ways, his reasons for striking are personal: He said his grandfather died from injuries suffered in a coal mine.

“It wasn’t difficult to go on strike because we knew we had to fight for what we deserved,” he said. “We wanted dignity back in our job.”

The conditions the miners are striking against stem from 2016, when Warrior Met Coal took over ownership of the mine after its previous operator went bankrupt.

During that transition, the miners saw drastic cutbacks in hourly wages, holidays, paid time off and medical coverage. Both tenured and new employees also lost their pensions, according to Phil Smith, director of government affairs for the UMWA.

The workers believed those benefits would be restored during new contract negotiations in 2021.

“We need to get these people back up to standard,” said Larry Spencer, the UMWA representative in the district, adding that the miners were disappointed with the new contract “and the people turned it down.”

Chris Lowery, another striking miner, believes the workers deserve fairer benefits given everything they’ve been through over the years.

Issues like those are only a couple of the reasons mining is one of the most dangerous occupations in the country. In 2001, the No. 5 mine in the complex exploded, killing 13 people.

“These are the gaseous mines in North America. … You have gas, you have water. A lot of the working areas is knee-deep in water,” said Braxton Wright. “It is a difficult job, not to mention the dust.”

The percentage of coal miners with the most severe type of progressive black lung disease has steadily risen over the last 20 years, and in recent years, severe black lung has been found in miners in their 30s and 40s, according to the Centers for Disease Control and Prevention. When it’s severe, the disease can lead to lung impairment, disability and premature death.

The miners who spoke to ABC News said their medical coverage went from 100% of medical fees covered before Warrior Met Coal took over to only 80%. They also said their time off is severely restricted now, and that they may be fired for taking too much time off, even if they have a doctor’s recommendation.

“They’re only making about 20-some dollars an hour, and they’re spending six weeks — sometimes seven — underground, 12 hours a day. Their bodies are broken, their lungs are all messed up,” said Kim Kelly, an independent reporter who has been covering the strike.

Warrior Met Coal declined an interview request from ABC News due to ongoing contract negotiations but said in part that it “remains committed to reaching an agreement with the United Mine Workers of America, which is apparent through our contract offer that included increases in key contract areas — wages, benefits and work/life balance. We have and will continue to work with the UMWA to reach a fair and reasonable contract that provides our employees with a competitive package while protecting jobs and ensuring the longevity of the Company.”

As the UMWA has been working to negotiate the contract with Warrior Met Coal, some striking miners traveled to New York City to send a message directly to the company’s largest shareholder, Blackrock, which owns 14% of the company, according to filings with the Securities and Exchange Commission.

“We are here to bring the picket, to bring the strike, to their front door, because this is affecting our lives, our families, our communities,” Haeden Wright said of the group, which traveled over 1,000 miles for the July 28 demonstration.

Having not worked in months, many strikers are under tremendous financial strain. The UMWA is paying them $700 every two weeks to hold the line, but it’s not enough.

“Everybody’s working other jobs,” Lowery said. “Some guys are cutting grass. Some guys are doing different things. Some of them already got good jobs — electrical jobs and plants and stuff — and we’re trying to hold out because we’ve put so much time here.”

Some, Haeden Wright said, have even returned to the mine — a betrayal she said is unforgivable.

“You can’t be in a union. You can’t say you’re UMWA and that these are your brothers and sisters … and now you’re crossing a picket line,” she said.

“We have to watch for each other underground. If they cross that picket line and betray you, who’s to say if you’re injured, they won’t walk off and leave you underground,” Braxton Wright added.

The issues the UMWA is seeing in Brookwood highlight a broader problem for unions in the U.S. By 2020, only 12.1% of workers were represented by a union — about half as many as 40 years ago — according to the Economic Policy Institute. On average, unionized workers earn about 11% more than non-unionized workers.

“The reason that we’ve seen such a big decline in unionization, despite workers’ interests in being unionized, has everything to do with massively increased employer aggressiveness against unions,” said Heidi Shierholz, director of policy at the EPI and a former chief economist for the U.S. Department of Labor. “It’s not that the workers don’t want to be in unions. It’s that the playing field has been so tilted that it’s really undermined workers’ fundamental rights.”

Braxton Wright said the fight in Brookwood goes beyond fairer wages and benefits.

“Once a company is allowed to do one thing to one group, all your other companies [are] going to follow suit,” he said. “This isn’t our fight here at Warrior Met Coal with the UMWA. This is America’s fight for working people everywhere.”

Amid a sea of camouflaged picketers — whose motto is “one day longer” — Haeden Wright said they’re not going anywhere until an agreement is reached.

“We’ll be here one day longer than the company will,” she said. “I don’t think we’re giving up. We’re already planning a toy drive for Christmas.”