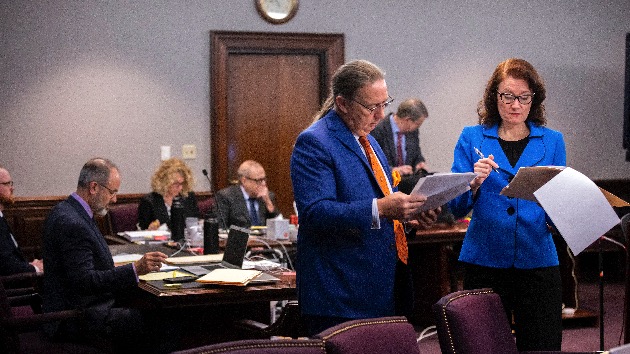 (BRUNSWICK, Ga.) — A Georgia jury resumed deliberating on Wednesday the fates of three white men charged with trapping Ahmaud Arbery with their pickup trucks and fatally shooting him.

“Your oath requires that you will decide this case based on the evidence,” Judge Timothy Walmsley told the jury before sending the panel off to begin their deliberations on Tuesday.

The jury got the case after Linda Dunikoski, the Cobb County, Georgia, assistant district attorney appointed as a special prosecutor in the Glynn County case, took two hours to rebut the closing arguments made on Monday by attorneys for the three defendants.

The jury, comprised of 11 white people and one Black person, heard wildly different summations on Monday of the same evidence in the racially-charged case. Dunikoski alleged the defendants pursued and murdered Arbery because of wrong assumptions they made that the Black man running through their neighborhood had committed a burglary, while defense attorneys countered that Arbery was shot in self-defense when he resisted a citizen’s arrest.

Travis McMichael, the 35-year-old U.S. Coast Guard veteran; his father, Gregory McMichael, 65, a retired Glynn County police officer, and their neighbor, William “Roddie” Bryan, 53, each face maximum sentences of life in prison if convicted on all the charges.

The McMichaels and Bryan were also indicted on federal hate crime charges in April and have all pleaded not guilty.

Here’s how the news developed. All times Eastern.

The jury was shown multiple times the now-famous video showing a struggle between Travis McMichael and Ahmaud Arbery over McMichael’s shotgun that partly captured the fatal shooting.

The panel sent a note to Judge Walmsley asking to view a short version of the video and an enhanced, high-contrast video of the deadly struggle. As per their request, the jury was played the videos three times each.

It was the first request from the jury to review any evidence in the case since they began deliberating on Tuesday.

The jury also asked to hear a 911 call between Greg McMichael and a police dispatcher around the time of the shooting on Feb. 23, 2020. In the 911 call played for the jury inside the Glynn County courtroom, Greg McMichael is heard explaining his emergency was “there’s a Black male running down the street.” He was also overheard yelling to Arbery: “Stop. Goddammit, stop” and “Travis.”

The jury resumed its deliberations on Wednesday morning, after working a little over six hours on Tuesday.

The panel was called into the Glynn County courtroom around 8:30 a.m. and Judge Walmsley thanked them for their service and sent them off to continue their discussions.

After more than six hours of deliberations on Tuesday, the jury was sent home for the night.

Judge Timothy Walmsley sent the panel home after questioning the jury foreperson about the jury’s progress.

“We are in the process of working to reach a verdict,” the jury foreperson told Walmsley.

When Walmsley asked if a verdict was imminent, the foreperson said, “At this moment, I think breaking for the day would be the best option.”

The foreperson went back and conferred with the other jurors, who initially said they wanted to keep working. But minutes later, Walmsley called the jury into the courtroom and told the panel it was a good time to break for the day and sent them home.

Deliberations will resume at 8:30 a.m. on Wednesday.

Judge Timothy Walmsley read the jury final instructions and explained the law and each charge to the jury before sending the panel off to deliberate their verdicts.

Walmsley told the jury that they must reach a unanimous verdict beyond a reasonable doubt, explaining that does not mean “beyond all doubt” or to a “mathematical certainty.”

He reminded the jury that the defendants have all pleaded not guilty to the charges and that the burden of proof is solely on the prosecution.

Walmsley said that lesser charges could only be considered against William “Roddie” Bryan. He said the lesser charges against Bryan are simple assault, reckless conduct and reckless driving.

“Each of you must decide this case for yourself,” Walmsley said.